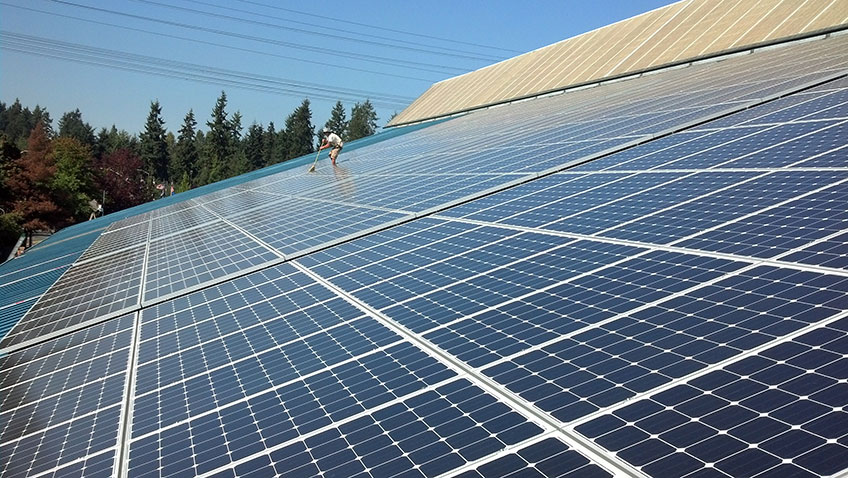 This summer, Weyerhaeuser King County Aquatic Center in Federal Way undertook a massive three-month project to undergo energy efficiency updates and other improvements. Western Solar was excited to support their effort to go green by installing the largest 100% made-in-Washington solar system to be installed in Washington State to date. Boasting 380 panels, the 104-kW solar array is also the eighth largest ever built in the state.

On August 25th, our crew began the process of installing the support clamps on the standing seam roof. Clamp installation was followed by the rails, while our electricians worked on getting the infrastructure in place for electrical wiring and connecting the 19 inverters needed for the massive system. The project was installed in two parts, with the right two arrays completed first, then the left.

The new array should produce about 104,500 kilowatt hours of electricity annually, helping to offset the facility’s electricity use by an estimated $9,400 each year. The system’s 380 275-watt high-efficiency panels and 19 Eltek 4.4-kW inverters are all manufactured by itek Energy, located in Bellingham, Washington.

This project was made possible through a grant from the Washington Department of Commerce’s 2013-2015 Energy Efficiency and Solar Grants for Local Governments program, aimed at promoting the use of made-in-Washington solar panels and inverters on public buildings.

About Weyerhaeuser-King County Aquatic Center
The Weyerhaeuser King County Aquatic Center is a legacy venue of the 1990 Seattle Goodwill Games. This 2,500-seat facility maintains one of the most active competition schedules in the country, hosting more than 50 events annually. It has been the site of Olympic Trials, top national and international competitions, and the Pacific Northwest’s premiere events. A recent economic study conducted for King County measured the financial impact of these events on the region in excess of $7.5 million annually.