As one of the semi-finalists competing for the Georgetown University Energy Prize, the City of Anacortes has been stepping up efforts to increase energy efficiency and awareness in its community. In addition to offering ongoing community presentations and workshops on energy efficiency, the City has contracted with the Skagit Community Solar Project to manage the process of adding solar to several buildings in the community.

Western Solar first partnered with the Skagit Community Solar Project for their inaugural project in July 2013, to design and install an 18.72 kW system on the Anacortes Middle School. Support for Skagit County community solar projects has since grown substantially, with the two recently completed projects reaching investor capacity much more quickly than the first. 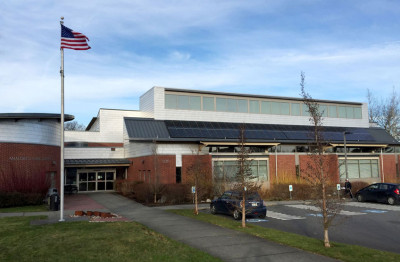 While the 142 itek Energy solar modules on the Anacortes Middle School are fairly hidden from sight, the Anacortes Public Library’s new 64-module array overlooks the parking lot and with its sleek black-framed panels is a perfect complement to the architecture of the library.

Each of the projects were built using made-in-Washington equipment and will provide free power to public service buildings, increasing Skagit County’s renewable energy base and benefiting local investors long-term.