For several years, the solar industry in Washington has experienced huge growth.  Between 2012 and 2014 the solar capacity installed by Western Solar more than doubled, thanks in part to the great incentives available to customers installing solar in Washington State.

If you’re invested in the solar industry in Washington, chances are you have heard that some utilities are beginning to communicate with customers about the caps that come with these incentives.  Recently, Puget Sound Energy and Seattle City Light both contacted customers with official updates to their renewable energy payment structures, along with Snohomish PUD sending out a notice of their current status.  Since we have had customers contact us for more information, we decided to provide our answer here to make what is happening in the industry easier to understand.

To understand why the incentives are in flux, it is important to have a little bit of background about how the incentives work in Washington State.  In May 2005, the state legislature enacted Senate Bill 5102, establishing production incentive payments for individuals, businesses, and local governments that decide to install a solar system to generate their own electricity.

Here are the basics: 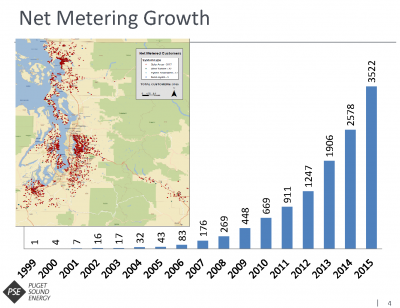 These incentive payments also have a cap for the utilities.  This cap is $100,000 or 0.5% of the utility’s taxable power sales, whichever is larger.  For small, rural utility companies who have fewer customers, this means they will not have to pay out more than $100,000. For large power companies like Snohomish PUD and Puget Sound Energy, their pay out amount is capped at 0.5% of their annual taxable power sales.  If requests for the incentive exceed the available funds, the incentive amount may be uniformly reduced.  Several factors have contributed to the current situation in which utilities are expecting to reach their caps sooner than originally anticipated.

Since this incentive program was enacted, Washington has experienced a solar boom.  PSE has seen a 35% annual growth of the industry in their territory (as seen in PSE’s Net Metering Growth chart), both in number of installations and number of contractors joining in the solar market.

Installers rely on individual utilities to communicate where their incentive programs stand, since each utility manages their own incentive pools and tracks their own levels of solar installations. This information is provided to the solar contractors each January at the Solar Washington year-end review meeting. 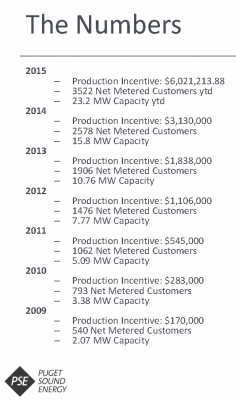 In 2014, the solar program was only using 30% of the available funds for incentive payouts.  The projected growth rate did not concern most installers, as there were several active groups working to get new solar legislation passed in 2015 or 2016 that would extend the solar rebate program.

This legislative push was headed by Representative Jake Fey on behalf of the Governor; Solar Washington, of which our General Manager Josh Miller is a board member; and our own installer trade organization/lobby group, Solar Installers of Washington, of which Western Solar is a contributing member.

The proposed legislation would have extended these programs for another 10 years prior to hitting the cap, while simultaneously “grandfathering” all existing customers in at the current $0.54/kWh rebate level.  Unfortunately, due to political infighting and the extended debate over the state budget this summer, the legislature failed to pick up the bill and will not be reviewing another bill until spring of 2016.

Several factors have led to utilities beginning to hit their caps sooner than was originally predicted.

Essentially, the rebate pool was reduced at the same time that new installs were all taking advantage of the higher incentive payments available for made-in-Washington systems.

All of these things together seem to have caused the rebate pool cap to have unexpectedly been reached 3 years faster than growth patterns indicated.

What We Can Do

So, now that we know where we stand, what do we do?  We are asking anyone and everyone interested in renewable energy to reach out to their state legislative members.  Whether you’re a Western Solar customer, a potential customer, or just want to keep the solar industry in Washington alive and strong, the legislature needs to hear from you.

Solar Installers of Washington is actively working on a solution. They are engaging with leaders in the state legislature and with utility representatives to pass a new solar incentive bill. The 2016 legislative session begins in January. It is critical to the future of state solar incentives that we pass a bill this session, both for current and future solar customers. Our state congressional representatives and senators have already heard from the installers, lobbyists, and utilities.  Now, they need to hear from the people.

Call or write to your legislator.  Let them know you’re disappointed that they have failed to take up the proposed solar legislation, and that it’s a priority for you as a constituent come spring session.

Below are steps you can take: